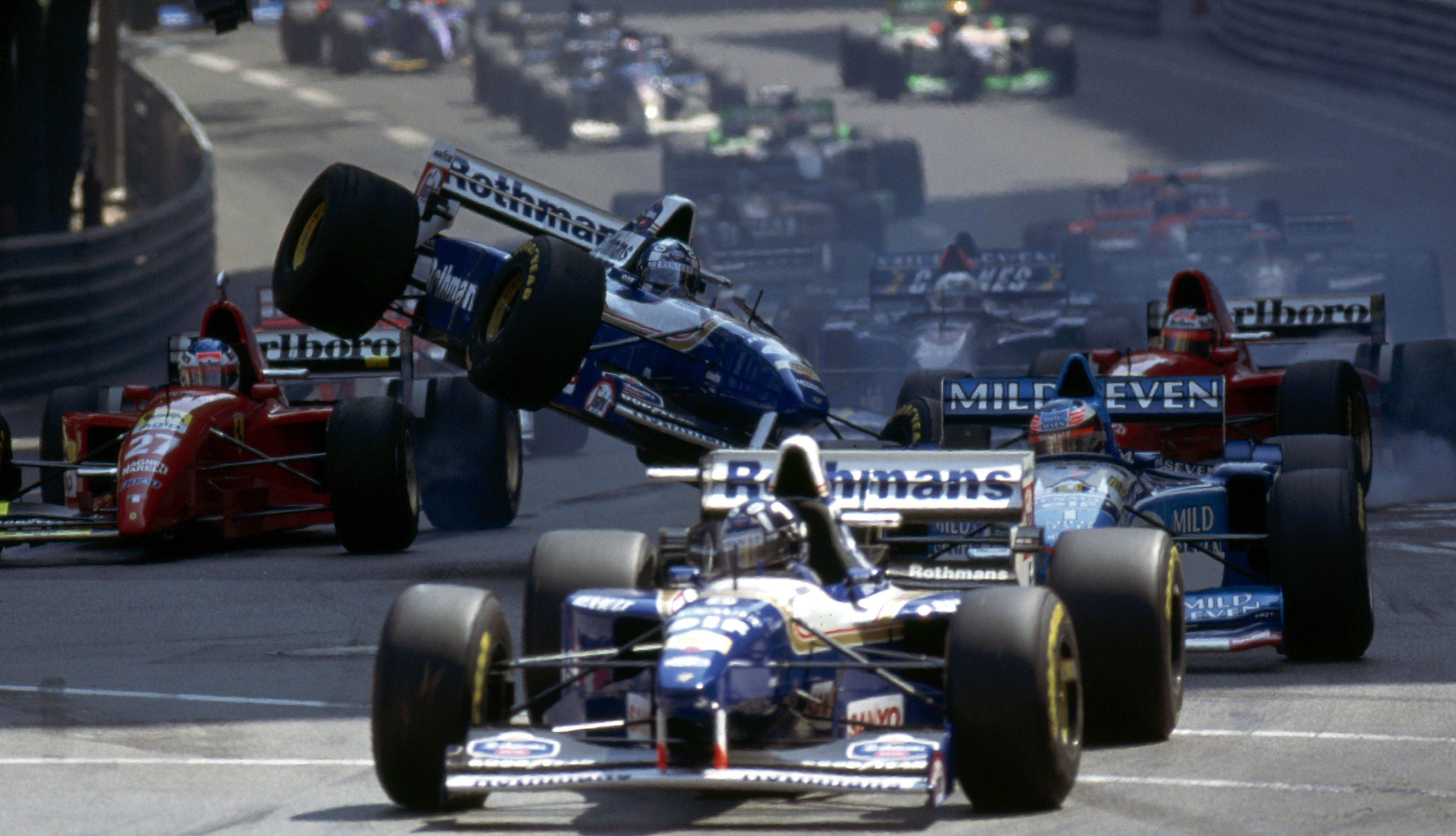 Even though he almost clinched the world championship (a couple 100 points short), our David Coulthard has faced difficult times. The audience remembers this 2000s driver going at the speed of light in his silver McLaren. But do they remember him retiring his dented Williams-Renault?

The Scotsman nicknamed DC raced in Formula 1 from 1994 to 2008. A career as long as your arm for a man with a jawline similar to a square with proper right angles. But I digress. Did you know his racing career is far from being ridiculous too? DC won 13 races, drove for famous teams like Williams (when they were still good) or McLaren (… same) and was runner-up or second runner-up five times.

Why should I lose my time writing about this driver that clearly doesn’t deserve it? The answer is simple. Coulthard is first and foremost a Man, with a capital M. And a Man has wounds, he has weaknesses. In 15 years of racing, DC’s blunders tally went through the roof.

13. That’s all the races DC won in Formula 1. A fair number, especially when his teammates were Damon Hill, Kimi Raikkonen or Christian Klien. However, the Scotsman should’ve pushed this number up to 15! Let me explain, we need to go back to the year 1995…

1995 Italian Grand Prix, held in the Autodromo Nazionale di Monza. Coulthard is on pole and Monza is all about engines, so his Renault V10 is a major advantage. Is DC going to do OK? Not really. Hold on to your seats, Coulthard ends his race… before it even starts! On the formation lap, at Variante Ascari, the Williams driver spins when trying to warm his tires up! It is a dumbfounded Schumacher-led pack that overtakes poor Coulthard, trapped in the well-named graveltrap. The rest of the field carry on for their spots on the starting grid. The race will start without its poleman!

The Gods of F1 show mercy however and take action at the end of lap 2 by provoking a multi-car pileup. The red flag is shown. Race director Charlie Whiting cancels the first start. A new one will be given shortly. Coulthard jumps at this chance by jumping in the spare-car. Thirteen laps later, DC is still in the lead. Well, he was until he spun once again! But this time, it’s for real. Race over.

If you thought the Italian GP was quite embarrassing for David Coulthard, you’re very wrong. It was literally nothing compared to what’s going to happen during the 1995 season finale in Adelaide, Australia. The Scotsman, early leader of the race, puts one hand on the trophy. After a twenty-ish laps, Coulthard has a comfortable lead over his mate Damon Hill. DC’s now heading to the pits for a quick stop.

Let’s watch this short clip together at the fireside.

I’m speechless. Words simply can’t come out. Even the most talented Greek writters wouldn’t know how to describe what happened in Adelaide on November 12th, 1995. Well actually, one can say “DC took himself out by crashing against the pitwall”, but it is so much more than that. In 58 countries, this kind of retirement is punished with life imprisonment without remission of sentence.

On a more serious note, what the hell did Coulthard do in 1995? Mistakes were made by the shovelful. And it actually costed his team, Williams, the title. In Monaco, DC eliminated both Ferraris before the first corner, spun on the second lap in Canada, spun twice in two corners in Suzuka… 50% of his races ended with a retirement! On the other hand, Damon Hill did nothing to improve the situation either. But it’s another whole story right there.

DC is also a great teamplayer, the type of guy that would do everything for the squad. Anyhoo, we already know that for the Scotsman, a win or a retirement won’t make much difference… In 1996, McLaren is in “work in progress” mode. David has been given the mission of making the team not suck anymore. His new teammate is Finland’s very own Mika Häkkinen. Both shared the same team for six years! As long as the famous Schumacher-Barrichello pair.

We are now in 1999. In three years, Hakkinen took his first championship and David only four wins. Michael Schumacher just broke his legs in Silverstone, leading to Ferrari being orphaned. The hopes of a whole nation, of all the tifosi, lie on a new man: Eddie Irvine. I sure can tell you Ferrari knew the game was up. Only ceaseless efforts from Mercedes, Hakkinen and Coulthard made Irvine believe he had his chance til the end of the season!

This remontada begins in Austria. Qualifying saw a McLaren front row lockout, both cars a whole second clear from Irvine, third. So far so good. But right off the bat, Coulthard tries something he never tried before: an overtaking attempt… on his own teammate! This abnormal scene takes place right before our very eyes, during the first lap of the race. The Scotsman seizes the opportunity and dives on the inside of the corner. Cataclysm ensues, as he comes from too far away and spins Hakkinen out!

Fortunately for McLaren boss Ron Dennis’ nerves, Hakkinen survives the attack but carries on dead last. During pitstops, Irvine steals the lead from Coulthard. Hakkinen, meanwhile, waltzes his way to the podium. Too late though, the harm is done. Coulthard’s “gift” to Irvine meant the Ferrari driver was now two points shy of Hakkinen in the standings!

Besides being a fearsome driver and making his teammates fearful, Coulthard is also an ace when it rains. Several times, he had the opportunity to show us mere mortals all he got. And God knows he did show everything.

Formula 1 experienced its best ever race in 1998. And Coulthard was lucky enough to be there. As usual, a picturesque summer rainshower strikes the Belgian Grand Prix. Lights go out, cars tumble down to Eau Rouge. There’s no visibility whatsoever, rain causes single-seaters to raise titanic spray of water. Suddenly, through this newly formed ocean, a car appears. Just like Moses, a McLaren comes to separate the waters and to guide its people towards the Promised guardrail.

The prophet is none other than David Coulthard himself. The Scotsman loses control on a straight due to aquaplaning. DC crosses the track once, hits the wall on the inside, bounces back to cross the road a second time and grounds to a halt next to the outside wall. The whole thing is as smooth as a bald head. Also, Coulthard takes out fourteen cars!

In all logic, red flag is shown and a second start is given less six cars, too smashed to be repaired in time. During the 25th lap of the second race, Coulthard is second to last. But he managed to hold back Formula 1 heavyweights Jarno Trulli and Shinji Nakano. The lap before, the McLaren was overtaken by a Brazilian driver. No, it wasn’t Rubens Barrichello (that would’ve been shameful too), it was Pedro Diniz… Now, the Scotsman sees red stuff getting closer in his mirrors: it’s Schumacher!

The Ferrari driver is in a race of his own right now. And he is ready to lap nice guy Coulthard. The latter is duct-taped to the racing line. Maybe he’s hoping Schumacher will swerve to the left to overtake him. But Schumacher thinks different™. He stays on the racing line, which is the fastest. What was bound to happen did happen. Race leader Schumacher impales himself on the backmarker! The impact costs the German a wheel and the race, and Coulthard his rear wing.

Their race is over. Coulthard couldn’t care less ’cause a point-scoring position was light years away. But Schumacher is not impressed. A win would’ve gifted him the championship lead and a retirement means that he’ll stay second, seven points behind Hakkinen. The Red Baron fell into a fit of rage, rushed to the McLaren garage to tell Coulthard his point of view on the incident… and let’s be honest, he also tried to punch him in the face.

One year later, on the Nurburgring, Coulthard’s back at it again. The Green Hell “Light” delivers one kind of a race. Oh man it did. Forget what I said on the 1998 Belgian GP, this is it. That’s what I’m talking about, the best one (yet): this race had everything! Beauty, craziness, sadness, suspense, you name it! You know what, you should stop reading this article, or maybe wait until the end, but right after go watch the 1999 European Grand Prix! As a F1 fan, it’s a duty.

Spoiler alert : A semi-soaked wet race sees Hakkinen lose everything by choosing the wrong tires. Coulthard reaps the benefits and takes the lead after Heinz-Harald Frentzen’s car breaks down. If things stay the same, the Scotsman would be three points shy of Hakkinen in the standings! All of a sudden, it rains harder. Some pit but not Coulthard. The McLaren driver stays with his dry tires on a wet track! Eventually, he makes a silly mistake… DC misses his braking point and goes off the track at the slowest speed ever. But that’s enough to end his race.

That’s the end of DC’s title hopes for 1999. The Scotsman ends his season 28 points behind his now two-time world champion teammate. Coulthard will never manage to be this close to the crown ever again. Strangely, his number of blunders decreases in 2000 and keeps decreasing the years after. In this new millennium, Coulthard even makes top-notch overtakes.

The McLaren years now over, Coulthard becomes a Red Bull driver in 2005. The retirement planning kicks in and the final decision is made in 2008. The Brazilian Grand Prix will be his last race. The Scotsman prepares this event very carefully: a one-off livery on his car, a tiny camera located in his helmet, etc. Maybe this reawoke the old demons or whatever but DC’s race ends on lap 1, corner 2. The reason: a crash, what else?

THE PINNACLE OF MOTORSPORT 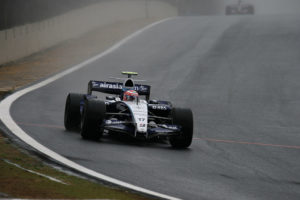 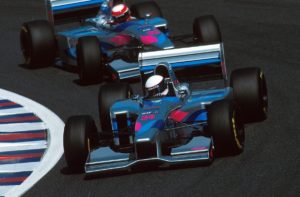 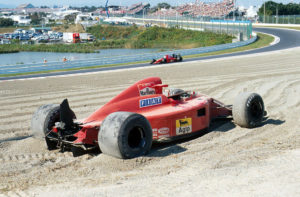