WHEN THE PODIUM CEREMONY GETS WEIRD 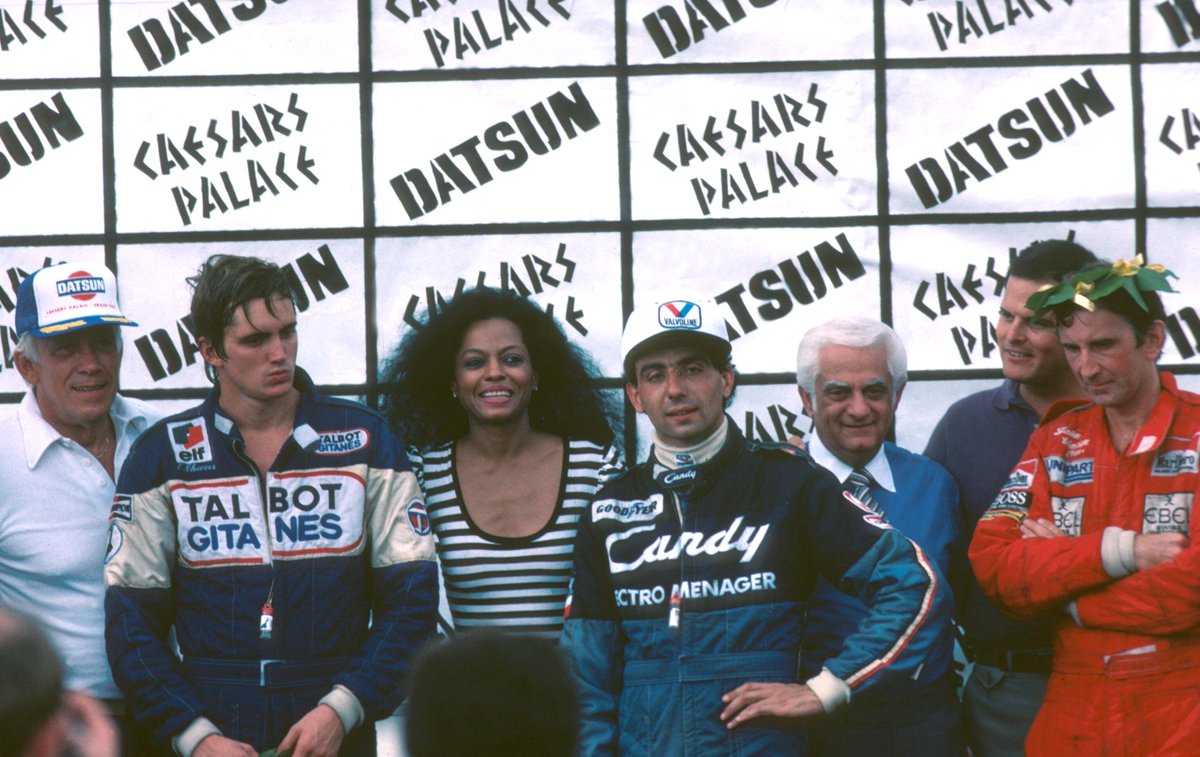 We’re taking a look at the strangest podium ceremonies in the history of Formula 1! When the dream of finishing first turns into a nightmare…

The podium. It’s a sacred moment where drivers celebrate, or fight, before showering with minimum wage-priced champagne. Formule moy1 cooked up 6 WTF moments that happened on an F1 podium!

Race organisers possess the .mp3 file of the anthem of all drivers and all teams on the grid. You never know, having the Mazurek Dąbrowskiego might be useful if Robert Kubica went on to win a race once more (only if the other 19 drivers had to retire, of course).

But a couple of years ago, the organisation was way less professionnal. So, when Alan Jones crossed the finish line in first position on the Österreichring in 1977, organisers were quite upset. They didn’t plan to play the Australian anthem, especially because Jones was driving a poor car at that time.

What to do in this case then? One piece of advice: don’t do what the Austrian GP organisers did that day. They sent a clumsy trumpeter play “Happy Birthday”! And no, it wasn’t Jones’ birthday. 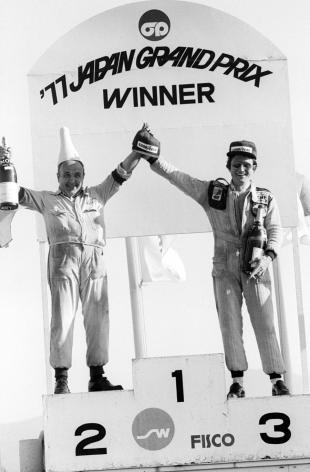 Before being a popular destination amongst the drivers, the Japanese Grand Prix was an alien in the F1 calendar. At the end of the 1970s, they weren’t any races held in Oceania nor in Asia. The addition of Japan in 1976 as the season finale forced the teams to go on a long trip, more important, to go on a very expensive one. A the race that could also be stakeless if the championship was decided earlier in the season!

Fortunately, James Hunt was crowned champion next to Mount Fuji in 1976. However, Niki Lauda had already got the world title in the bag for the 1977 event. Many forfeited as a consequence: Renault, Hesketh, Copersucar didn’t bother to show up… even Lauda!

His most ferocious opponent, James Hunt, won the race. It was his last success in F1. Carlos Reutemann finished second, in front of Patrick Depailler. But on the podium, where he expected to congratulate the first two drivers, Depailler realised that he was all alone! Hunt and Reutemann couldn’t wait to receive their trophy… literally. As soon as they crossed the line, they left the track and took the first plane heading to Europe!

So, the French driver was the only one spraying the champagne. Something never seen before! To make things worse, a guy working for Magneti Marelli wearing a strange cap took pity on him and joined him on the podium.

One of the (numerous) wet dreams of Bernie Ecclestone came to life at the beginning of the 1980s. The FOCA leader got himself a deal with three different venues in the United States: Long Beach, Detroit and Las Vegas. But, as it had to be expected, the Nevada racetrack, located within the Caesars Palace parking lot, was ghastly. However, organisers had “show biz” written all over their DNA and successfully compensate for the dreadful spectacle on track.

Let’s take the 1982 GP podium ceremony for example. Fifth-placed Keke Rosberg clinched the world title. He was logically invited to join the top three drivers on a quite odd podium. The drivers climbed at the rear of a pick-up truck (!) and received their legionnaire helmet-shaped trophy (I kid you not) from the hands of Diana Ross herself, here’s a picture to prove it. 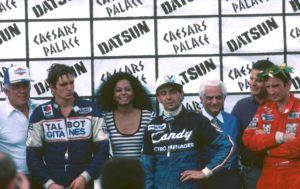 And the disco diva sprayed the champagne alongside the drivers too! Is that what they call the American dream?

As I’ve told you before, it has been customary to spray a whole lot of champagne on the podium ever since the 1967 Le Mans 24. And in Jacarepagua, during the 1986 season opening, champagne deserved to be sprayed. Nelson Piquet and Ayrton Senna finished one-two on home soil. The crowd roared its approval, the organisers threw in a solid two minutes of pure Brazilian anthem.

But disaster struck when it was time to celebrate. The corks refused to pop out! Senna struggled for a minute in order to spray the precious liquid, as he needed the help of several officials. Piquet and third-placed Laffite took less time to do so but there was really nothing to be proud of.

Once again, it’s nothing new if you’ve been a long-time reader of Formule moy1. But it’s our duty to keep the memory alive.

To be short, Tiago Monteiro only qualified 17th on the grid for the 2005 USGP. Yet, he achieved the impossible on race day. When the red lights went out, the Portuguese driver overtook fourteen drivers, including polesitter Jarno Trulli! The fact that those fourteen fellas were equipped with Michelin tyres and had to retire in the formation lap is anecdotal.

Monteiro took the chequered flag in third position, as only six drivers started the race. On the podium, he celebrated like it was his last day on earth. Honestly it’s kind of cringe.

Thrilling last laps during the 2016 Mexican GP. Max Verstappen, third, was on the ragged edge. Behind him, Sebastian Vettel tried his best to get past him. Any other driver would’ve yield facing the four-time world champion. But the Flying Dutchman isn’t like any other driver.

Verstappen defended his position… by cutting the track. A very efficient technique (especially in the videogame F1 2004 for the PS2, I strongly recommand you give it a go) but also a very illegal one. The Red Bull engineers told Max he had to give up the position, however the driver went under a tunnel at the very same moment. 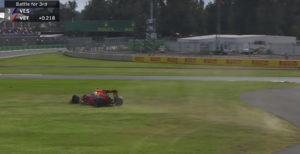 Still behind, Vettel exploded in anger in his radio:

“Move! Move for fuck’s sake! He’s a bastard, that’s what he is. I mean, am I the only one or are you seeing what I’m seeing? He’s just backing me off into Ricciardo. Fuck me. He has to give me the position, end of the story.”

It was a mistake, Vettel’s engineer talked back. He brought up Charlie Whiting on the table, the former F1 race director. Vettel was really unimpressed, as he had to say that next. It may be funnier if you read this with the voice of Tony Montana.

“Yeah? You know what? Here’s a message for Charlie: Fuck off! Honestly. Fuck off.”

At the end of the race, Verstappen was third, Vettel fourth and Ricciardo fifth. But ill-gotten gains are always short-lived. In the cool down room, before the podium ceremony started, Verstappen was escorted out by the FIA marshalls! The Dutchman got himself a penalty as Vettel walked his way into the podium, alongside Hamilton and Rosberg.

And the joke wasn’t over yet. This race was truly a gift that kept on giving because later, the Ferrari driver is also penalised for his antics! It meant that Ricciardo ended up in third position despite not making one single overtake on track! Never change, Formula 1… 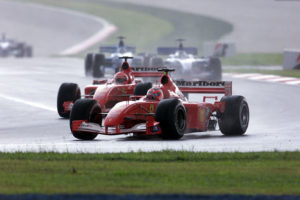 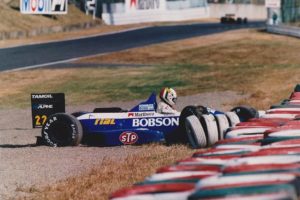 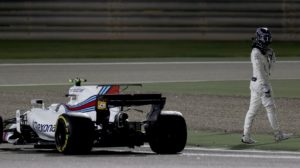