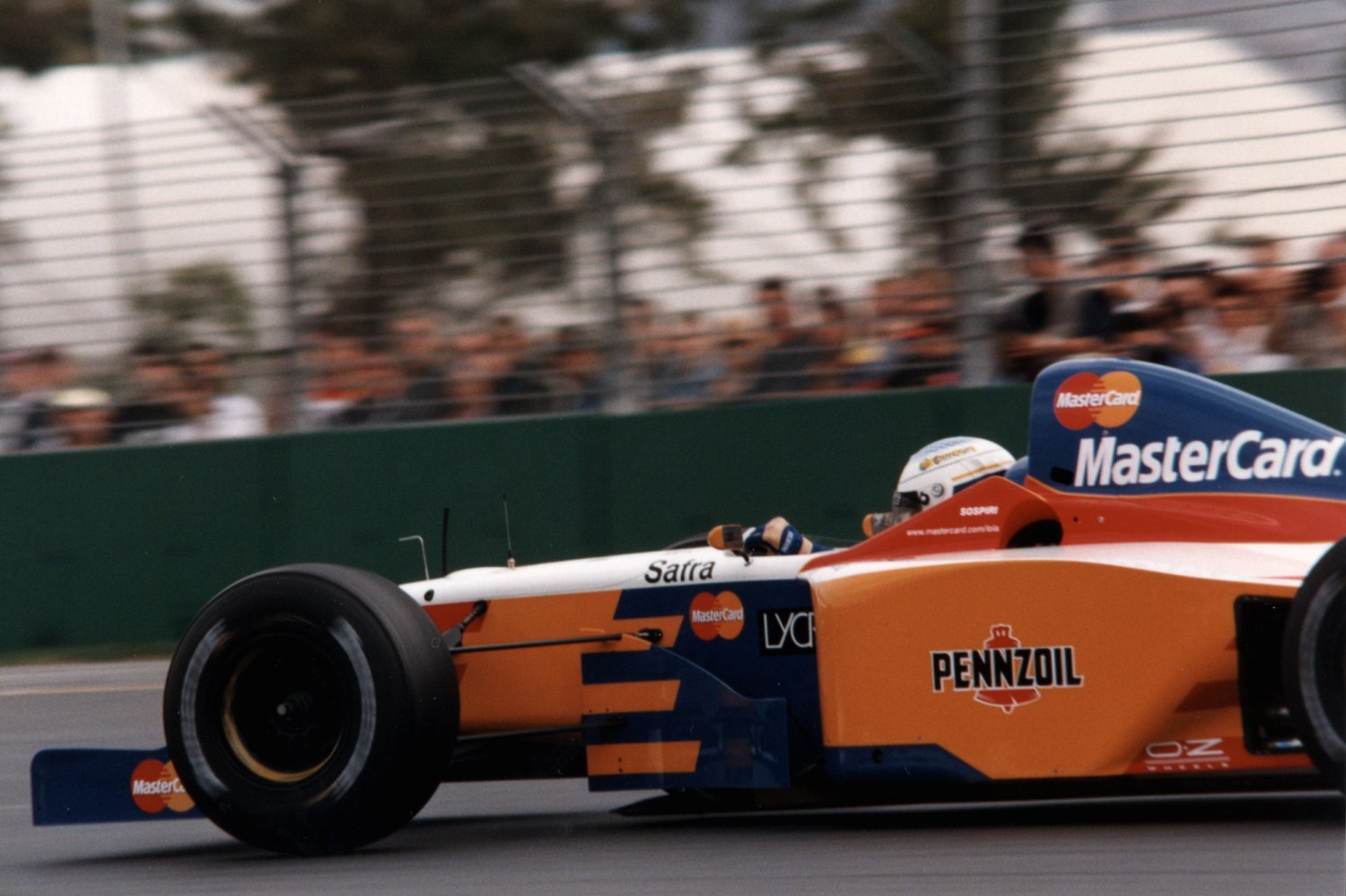 We made fun of HRT, Caterham and Manor… “performances” a few years ago. But those three teams could boast of being in Formula 1 for several seasons, which is not the case for some…

In F1 as in any other sports, preparation plays a crucial role. As it’s very important, one just can’t take it lightly. Both drivers and teams may be concerned. Just see for yourself.

Lola. This British car manufacturer had and still has a very good reputation in motorsport. Since the 1960s, it has been impossible not to see one of their cars during a motorsport event: F1, F2, F3, F3000, CART, ChampCar, Endurance, GT, CanAm… the list is not even exhaustive. And they won stuff! Their hegemony was the strongest in the United States. Between 1989 and 1993, 90% of the CART field ran Lola chassis!

A LIFE OF SUPPLIER

The Lola-Hill association lasted for two years, with inconclusive results. With Carl Haas, the team had nice backings and top-rated drivers, Alan Jones and Patrick Tambay. But in the end, the team folded after two years of racing. The next association, with Larrousse, wasn’t so great either. Super Aguri Suzuki scored a podium-finish at home in 1990 but the team had to face prequalifications. Unable to pay the bills, Larrousse and Lola parted ways for 1992.

The latest season of Lola in Formula 1 saw the manufacturer join forces with Scuderia Italia. ‘Twas in 1993, when the awesome T93/30 rocked a beautiful Chesterfield livery. Although it looked good, the car was so bad the team pulled the plug before the season even ended. The 1990s are truly cruel for Lola. The manufacturer only had the scraps in Formula 3000 and CART, while Reynard kept on winning races. If Lola wanted to survive, they had to go elsewhere.

The days of supplying are over. Lola wants to be a full-fledged F1 team. Between 1994 and 1995, the British structure attempted a comeback in the pinnacle of motorsport with a rolling lab: the T95/30. However, the FIA changed the rules many times between 1993 and 1996. This, paired with a lack of financial support, gunned down the team plans.

We are in 1996. Michael Schumacher just joined Scuderia Ferrari. Before the season started, a new team is announced. No, it’s not Lola but Stewart Grand Prix. Founded by the son of three-time world champion Jackie Stewart, the British team has the full support of Ford; blue benjamins are not lacking. Meanwhile at Lola’s HQ, the whole crew struggle to find a couple of pence… After postponing its comeback in F1 over and over again, Lola finally made the long-awaited announcement. They’ll come back in 1998 with a car powered by a homemade V10 engine within a team financially powered by MasterCard.

Nothing will go as planned though. MasterCard cannot afford to wait that long and relentlessly presses Broadley to make some changes. Unable to survive without financial support, Lola yields and will come back a year ahead of schedule. However there is an issue. A very big one.

December 1996. The F1 season has been over for two months now. All of the teams, I mean every one of them, are working their arse off on their new 1997 car. Ferrari is working, McLaren is working Sauber is working, hell, even Stewart already has its car ready. Lola is very far away from that. In fact, the team just started to draw its car! Nothing is ready, tires included: no contract has yet been signed with Goodyear or Bridgestone…

The 1997 season-opener is scheduled in three months from now. Even though this delay seems long, it’s something extremely short in Formula 1. It’s like asking you to cook two-minute rice in thirty seconds. That’s certainly doable but the result will be bad and will make your tummy hurt.

Three months, that’s way too short to build a real F1 engine too. Lola postpones its introduction to mid-1997 and then politely asks, well, implores Ford to provide engines. Ford kindly accepts Lola’s money in exchange of used V8 engines… which are two years old! For comparison, Lola’s “rivals” Stewart have the latest Ford V10 engines. In a nutshell, there’s a 100 horsepower gap between Lola and the others… What the hell.

And the drivers then, are they good? Of course they aren’t. Lola appoints Vincenzo Sospiri, Italian by profession and 1995 Formula 3000 champion. The young hope of a whole nation will soon turn… 31. His teammate will be Ricardo Rosset do Brazil. Here at Formule moy1, we had a rough time indentifying his talent. On one hand, he was runner-up in the 1995 F3000 season, and on the other hand it was his ability to drive off the racetrack that earned him the title of the worst 1996 F1 driver. Being equipped with a large Brazilian rals-filled suitcase, Rosset is the perfect match for Lola. That Sospiri-Rosset pair, that’s some nightmare fuel right there. The team has something to scare Ferrari or Williams, definitely.

Fiiiiiiiinally, on February 27, 1997, SEVEN DAYS prior to the season kickoff, Lola presents its car! Code name: T97/30 . The official shakedown takes place in a hurry… on a straight line. That’s too much to ask for the poor Ford engine, which breaks down shortly after. A few days later, Lola is on to a new test. The team only makes a handful of laps and finds out a monster issue. Put simply, the car is so badly designed that it produces way too much drag in a straight line to go fast AND it doesn’t generate enough downforce to turn properly! A real aerodynamic tour de force.

The FIA, governing body of F1, never runs out of ideas. In 1996, the 107% rule is introduced to get rid of slow drivers. During qualifying, drivers lapping 107% below the poleman won’t be allowed to race on Sunday. Back then, Andrea Montermini held the record of slowness on a qualy session with a time 110.5% (= nine seconds) slower. Then, the Lolas happened.

The F1 Circus unpacks in Melbourne, Australia, for the first race of the season. Two (calamitous) runs in private tests were all the experience Lola had. It was agreed that the British team will suffer. Only Broadley argues the opposite, nobody is fooled though. On Friday, Rosset and Sospiri are ten and twelve seconds slower than the fastest time. The weekend will be long. The team is lost in its setup. Both drivers are 18 mph slower than the rest of the field on a single lap! During qualifying, all drivers improve their free practice times… except two: neither Rosset nor Sospiri can lap faster. Both were so slow their laps didn’t have a time but an expiration date [laughs in the assembly]. To be honest, Lola’s qualifying struggle could’ve put its drivers on pole… only if they raced in F3000!

Were their times that bad? Yes, big time. Vincenzo Sospiri is eleven and a half seconds away from pole position. The most dramatic thing is that the rookie Sospiri, a driver that barely drove an F1 car prior to this race, this guy is a full second ahead of his much more experienced teammate Ricardo Rosset! Converted to percent, Sospiri  and Rosset were respectively 112.9% and 114.2% slower! That’s the absolute record of slowness on a dry track (when the 107% rule was still a thing).

Rude awakening for Broadley and Lola. Those guys, who thought Stewart would be a direct rival, are barely faster than a Formula 3000 car! An aberration for MasterCard, it calls its sponsorship contract into question. The American corporation dwells on it for a few days and a final verdict was in.

MasterCard ceases its support with immediate effect! Broadley and his boys travel to Brazil for the next race… and instantly turn back. Lola withdrew: without funds, impossible to carry on. The team tried to find new backings but how can you convice anyone to give you money after that god-awful Melbourne performance? Now the damage is done, we won’t see the colorful cars on the F1 racetracks no more. The washout is total because the official video game “F1 1997” didn’t even include the T97/30… Is there any justice in this world?

As the ad said: “A deal with a tyre supplier: $5M. An F1 inscription fee: $20M. Lose your entire credibility after four official sessions? Priceless.” 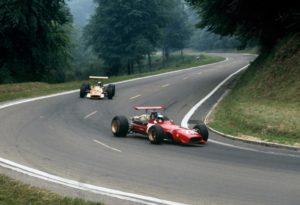 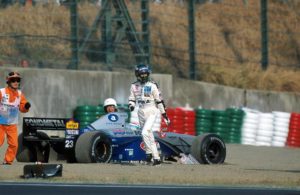 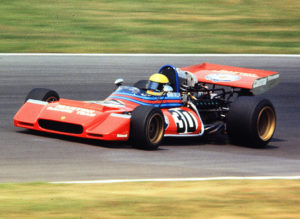